The LASO Scholarship is awarded to one or more high school seniors who have demonstrated exceptional talent and interest in music. The student must attend Los Alamos High School or live in Los Alamos County. The  scholarship is intended to encourage the recipients to continue their musical activities, regardless of what  they pursue as a career in the future.

Anyone who is interested in helping to fund the LASO  Scholarships can send a check, made out to LASO, to PO Box 613, Los Alamos, NM 87544.

Los Alamos Symphony Orchestra (LASO) usually has one or more seniors play with them to have the experience of playing with a large orchestra. The years 2021 and 2022 were a different type of experience for everyone including the Symphony.

The symphony has not played since late 2019 but the need to find recipients for the annual scholarships was still there. The scholarships went to four very talented musicians who played in their high school’s bands and orchestras as well as other community orchestras. 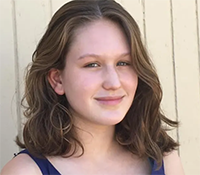 Elizabeth Frost was awarded the $500 Jane Gerheart Scholarship. Frost played with the Santa Fe Youth Symphony’s Jazz Program since it started in 2022, and she also played with its predecessor, Los Alamos Jazz Project, since the 8th grade. She played in both small combos and larger big bands, in addition to the school jazz big band. She has played the electric bass since 8th grade but started music in preschool on the violin.

This fall, she will be taking a gap year to study abroad in Germany through the State Department’s Congress-Bundestag Youth Exchange (CBYX) Program. Afterwards, she will attend Columbia University to pursue a degree in foreign affairs.

Frost said that playing the bass in both the high school jazz band and the Los Alamos Jazz Project has been one of the highlights of her high school career. She has made lifelong friends with people and is forever grateful for all the opportunities and friendships, as well as the mentorship of High School director, Ryan Finn. She believes his mentorship, playing in his jazz ensembles, helped shape the person she is as well as her future beyond Los Alamos.

LASO Scholarships are awarded to one or more high school seniors who have demonstrated exceptional talent and interest in music. The student must attend Los Alamos High School or live in Los Alamos County. The scholarship is intended to encourage the recipients to continue their musical activities, regardless of what they pursue as a career in the future.

Marek Jablonski, was awarded $500, from the Rosemary O’Connor Scholarship. Jablonski played in New Mexico honor and all-state orchestras, musical groups at multiple summer camps, and various less organized groups such as chamber orchestras. He believes that music has been fundamental to his development as a person due to the necessity of learning to work with various people from all backgrounds and skill levels. He intends to continue to pursue music in a more direct way while in college by joining school symphonic or chamber orchestras where he can. He believes that musical groups will help him find a community with other like-minded students who are passionate about music. He said, “Music has been and shall continue to be a central part of how I experience and find joy in life.”

Andrei Maiorov, was awarded a $250 Scholarship from LASO. He began early by playing Piano and trumpet and played trumpet in the Barranca school band in fifth grade. At Mr. Finn’s suggestion, he switched to the French horn. He played the French horn in several ensembles; the LAMS bands, jazz band, Santa Fe Youth Symphony Association Brass Choir, LAHS bands, Los Alamos Jazz project, New Mexico Honor band, and New Mexico All-State. He was section leader for the Mellophones/French horns the last two years. He was also a part of the Santa Fe Youth Philharmonic Orchestra from 8th to 10th grade. As a Junior he played with the Santa Fe Youth Symphony Orchestra and intends to keep music in his life by going to a college with a band/orchestra program. He bypassed the colleges where he found he would not be able to continue playing and auditioned for the different ensembles at the college of his choice so he could continue to play while there. He will keep music in his life while at college and hopefully throughout his life. 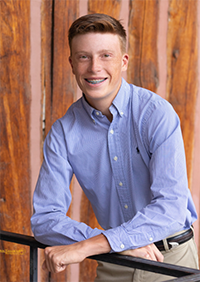 John Teague was awarded a $250 Scholarship. He started playing Baritone in the 5th grade and switched to French horn in the 6th grade. He played the French Horn with the Santa Fe Youth Symphony for six years. He said, “While I have always enjoyed playing in the band, there is nothing like the symphony experience. I love the sounds of the symphony and the music we were able to play.” He recommends anyone considering playing with a symphony to do so because it opens-up a broader musical experience. He plans on studying Natural Resource Management with a major in Wildlife Biology at Texas Tech University.  While at Tech, he plans on being a part of the Goin’ Band, the Texas Tech Marching Band and hopes to have another opportunity to play in a symphony again.

Three years ago the Los Alamos Symphony Orchestra needed a bassoon player.  A Sophomore from the Los Alamos High School -  Karin Ebey - very capably filled that spot.  In the years that followed Karin has continued to be an active member of the community orchestra.  She has also played in the LAHS band and has completed community service projects.  Now, a graduating senior, Karin will receive the LASO $500 Jane Gerheart Memorial Scholarship.  This scholarship honors Jane who was active in LASO, playing oboe and serving as board president.  Karin plans to major in biology and chemistry in college and continue playing her bassoon.  She comments: “ Playing with the Los Alamos Symphony Orchestra has been one of my favorite experiences because I found a community and a place where I fit in and a place to play amazing music and challenge myself.” 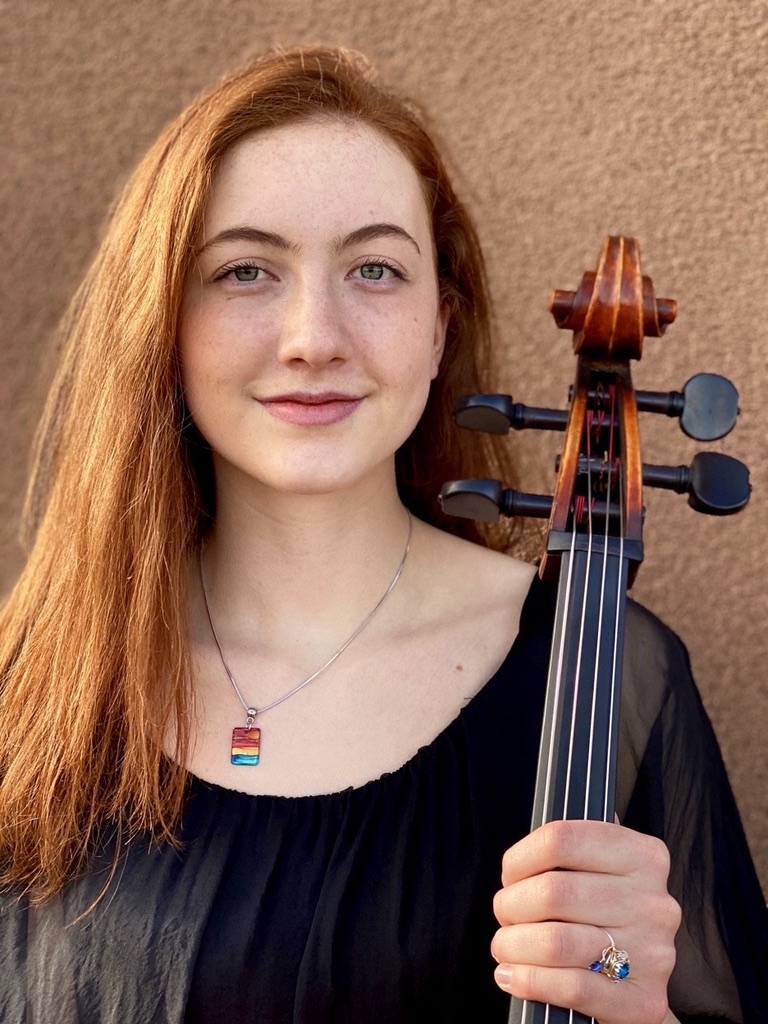 Ursula Coe, cellist, is another LAHS student who is being honored by the Los Alamos Symphony Orchestra.  Ursula will receive the $500   Rosemary O’Connor Memorial Scholarship. In 1947,  Rosemary was one of the founding members of LASO and she continued to play in the orchestra into her 90’s.  Ursula has played cello with the Santa Fe Youth Symphony Orchestra and has served as cello section leader.  She won the Deborah Beene Grand prize in 2020 among other highlights.  She plans to  continue her studies in cello performance at the Royal Conservatoire of Scotland earning a BMus with Honors in Cello Performance, and eventually earning a Master of Music or a Doctor of Musical Arts. 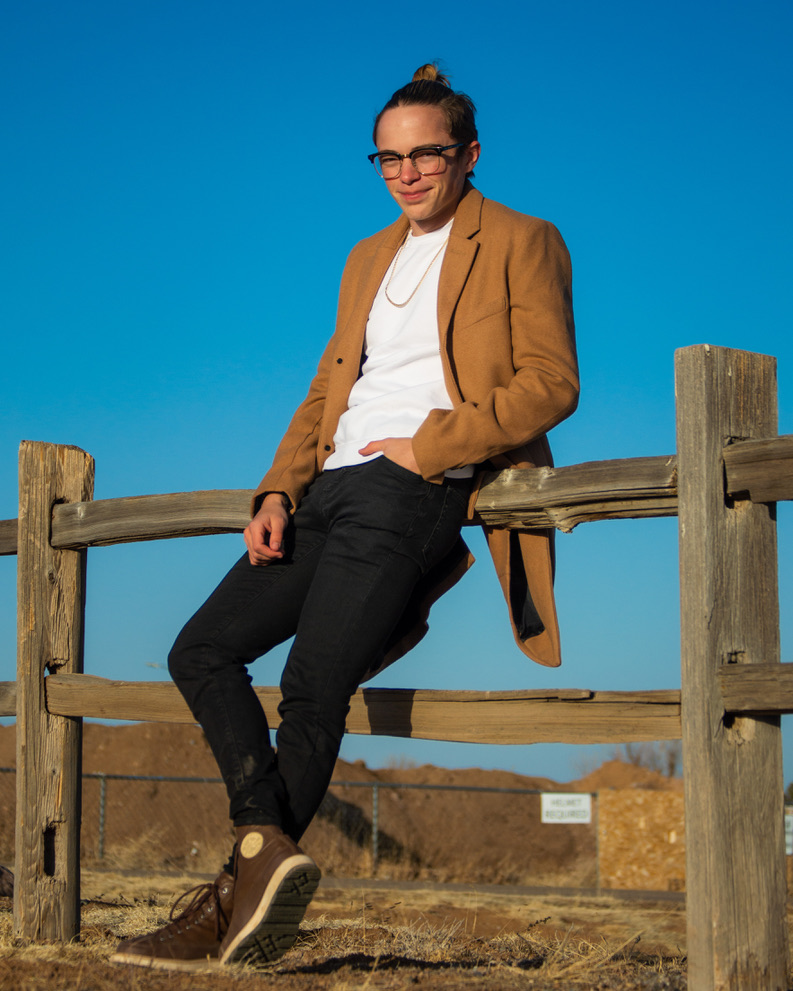 Jackson Bell, also a LAHS student, will receive the third LASO $500 scholarship.  Jackson is a trombone player and plans to become a music educator.  He played with the Allstate Symphonic Band and Orchestra during each of his high school years.  He also played with the Jazz Allstate Big Band as lead  trombone.  Jackson has been accepted at the Berklee College of Music and at UNM.

Allison Peterson was awarded the Rosemary O’Connor Memorial Scholarship of $400. O’Connor was one of the original LASO members and continued playing violin with the orchestra into her 90’s. Peterson plays cello and has studied with Dana Vinograd.

In 2018, Peterson was principal cellist for both the LA Symphonic Orchestra and the Santa  Fe Youth Symphony. She also played in the All State Orchestra for her junior and senior years.

Peterson plans to study biomedical science/pre-med with a minor in cello performance at Brigham Young University.

Sarah Crotzer was awarded the Jane Gerheart Memorial Scholarship of $400. Gerheart was an oboist with LASO for many decades, served on the board of directors as president, and was a band teacher in the Los Alamos public schools. Crotzer has played violin for nine years and was the concert mistress of the LAHS Symphonic Orchestra, soloing in its 2019 Winter Concert. She also won the Rotary leadership award. Crotzer will attend New Mexico Tech and plans to major in biomedical science.

Esther Wermer was awarded a Los Alamos Symphony Scholarship of $200. She has studied violin with Kay Newnam and played in the LAHS Symphonic Orchestra during her high school years. Esther  plans to continue playing violin in the Boyce College orchestra where she will be studying philosophy/politics/economics next year.

Sarah Worley was awarded a Los Alamos Symphony Scholarship of $100. Sarah has played horn in the Santa Fe Youth Symphony for two years and plans to continue studying horn with private lessons while in college. She has been involved in choir, jazz choir and musical theater.